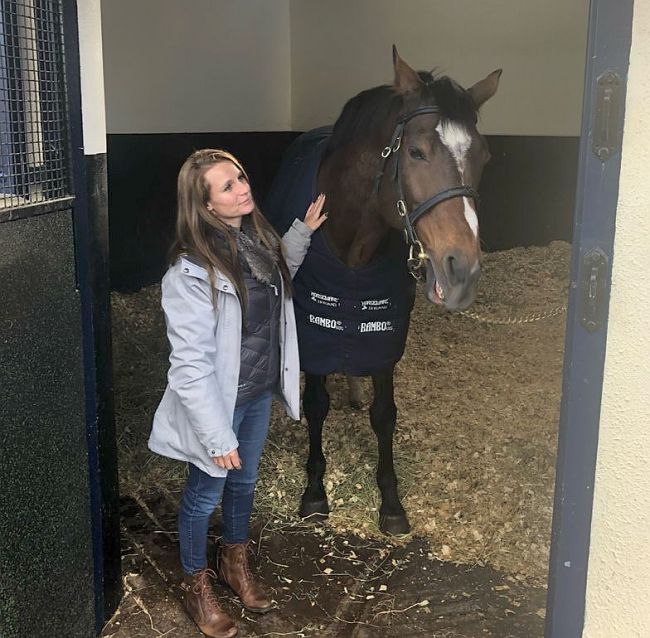 We had the pleasure of visiting Coolmore Stud just a few years ago, where Kat Riley had this photo taken with Galileo, the gentle giant, who was euthanised following a foot injury yesterday.

Galileo, one of the most significant and successful stallions in racing history and a cornerstone of the Coolmore breeding operation, replaced his own sire, Sadler’s Wells, as Europe’s pre-eminent stallion, having provided Aidan O’Brien, his trainer, with his first Derby success at Epsom in 2001.

He was impeccably bred on both sides of his pedigree, being out of Urban Sea, the 1993 Prix de l’Arc de Triomphe winner, and made an immediate impact with his first crop of foals, which included Nightime, the 2006 Irish 1,000 Guineas winner.

He was Europe’s champion sire for the first time in 2008, when New Approach was the first of a record five sons of Galileo to win the Derby, and then in an unbroken run of 11 seasons from 2010 to 2020.

At the time of his death, Galileo had sired 91 individual Group One winners, including the brilliant Frankel, the sire of Adayar, this season’s Derby winner, while in all, 20 of his sons have gone on to sire Group One winners themselves, guaranteeing Galileo’s status as a constant thread running through the pedigrees of top-class thoroughbreds for many decades to come.

“We send our sympathies to Coolmore and the Magnier family,” said Heversham Park’s Nigel Riley.