Pivotal is a gift that keeps on giving! 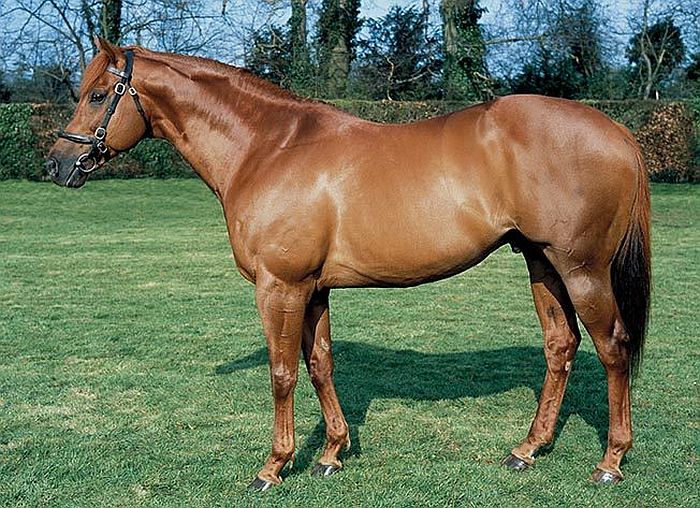 CHEVELEY Park Stud’s homebred stallion Pivotal (sire of Heversham Park’s Gr1-placed freshman, Wings Of Desire (IRE)) has been a mainstay of British breeding for several equine generations and is currently standing his 24th season at the famed Newmarket nursery.

Pivotal’s record has been phenomenal, both as a sire, as a sire of sires and, more recently, as a broodmare sire, having been Europe’s leader in that category for the past two years (prize money).

He himself has now sired 31 Gr.1 winners, six of his sons have sired Gr.1 winners and his daughters were responsible for eight Gr.1 winners of 12 Gr.1 races in 2019 alone.

He is by former Cheveley Park resident Polar Falcon (Nureyev), who won three Pattern races in 1991, including the Gr.2 (then) Lockinge Stakes over 1m and the 6f Gr.1 Haydock Sprint Cup, and sired 14 other Pattern winners from a sadly short stud career (he died at 14).

Interestingly, Pivotal was the first of two foals his dam produced in 1993; he arrived on 19th January and her next foal, Fearless Arrival (Generous), was born that December and went on to win in New Zealand.

With a blend of speed and stamina in his pedigree, Pivotal has no duplications within the first five removes.

Pivotal was trained by Sir Mark Prescott and had three runs in late 1995 as a two-year-old. He finished unplaced and unfancied on his Newbury debut over 6f that October, started second favourite and scored by a comfortable two and a half lengths over the same trip at Newcastle 11 days later and was out again after a week, scoring by four lengths at Folkestone over 5f as the evens favourite and in a new all-aged course record time.

He did not reappear until Royal Ascot the following year, when he wore down the year older Mind Games, already a multiple Group winner, in the Gr.2 (then) King’s Stand Stakes. He reportedly “ran a bit flat” after only finishing sixth (but again ahead of Mind Games) in the Gr.1 July Cup and was back to the minimum trip for his final outing in the Gr.1 Nunthorpe Stakes, in which he was the only three-year-old in the eight-strong field. Racing just off the pace, he got up close home to land the spoils by a short head. He retired as the winner of four of his six starts, all of which were on good to firm ground.

He had a first crop of 58 foals in 1998, 32 of whom were winners, including nine at Stakes level. Three of those scored in Gr.1 company, namely the 5f sprinter Kyllachy, the 2100m German Classic winner Silvester Lady and the US-based Golden Apples, who won Gr.1s from 1m1f to 1m2f and has since produced a Gr.3 winner by Storm Cat. Five of his Group winners came from his second crop, which numbered just 35 foals, and included Gr.1 winners Chorist (dam of a Gr.2 winner by Galileo) and Megahertz.

He sired Gr.1 winners in ten of his first 11 crops, from the Gr.1-winning juveniles Siyouni and Amanee, leading sprinters such as Regal Parade and Somnus, milers including Excellent Art, Falco, Halfway To Heaven, Immortal Verse, Peeress, Saoire and Virtual, 10f horses such as African Story, Izzi Top and Megahertz and the 12f Classic winners Buzzword and Sariska.

Pivotal’s 31 Gr.1 winners of 49 Gr.1 races to date are the produce of 31 different mares by 28 different sires; Buzzword, Saoire and Siyouni are out of Danehill mares, while Addeybb and Regal Parade are out of daughters of Kingmambo. Four more are out of mares by other sons of Mr Prospector and another two are out of paternal grandsons of the same stallion.

Of the 31 dams of his Gr.1 winners, 13 were Stakes winners themselves and a further three were placed in Stakes company. Three were Gr.1 winners; the dual Argentinian Gr.1 victrix Safari Queen (dam of Queen’s Jewel), dual German top-level scorer Gonbarda (dam of Farhh) and Prix de l’Opera winner Zee Zee Top (dam of Izzi Top), while Cassandra Go (dam of Halfway To Heaven) was a dual Gr.2 winner.

To show how Pivotal can upgrade his mares, only two of the 31 have managed to produce other Gr.1 winners, Brando’s dam having also foaled US Gr.1 victrix Ticker Tape to Royal Applause and Siyouni’s dam also being the dam of Canadian Gr.1 winner Siyouma, a daughter of Medicean. Several of the rest have produced Gr.2 or Gr.3 winners, including the dams of Avilius, Falco, Farhh (his full-brother Racing History), Golden Apples, Halfway To Heaven, Izzi Top, Megahertz (her full-sister Heaven Sent), Regal Parade and Virtual.

Does Pivotal tend to throw to his mates? Not necessarily, particularly with regard to his five Gr.1-winning sprinters whose close ancestry is inconclusive:

However, of Pivotal’s four Gr.1 winners over 1m3f or further, the dams of both Avilius and Buzzword won over 1m4f, while Sariska’s dam, a daughter of Muhtarram, scored over 1m6f and her third dam, by Blakeney, won the Gr.1 Irish St Leger over the same trip. Silvester Lady’s dam, by Soviet Star, was unplaced, her grandam was a 1m2f Gr.1 winner in the US and her third dam is by the smart French 2400m runner Silnet.

He obviously has less influence as a broodmare sire than he does as a sire, and of the Gr.1 races won by progeny of his daughters, 18 per cent were run over 1m and 39 per cent were between 1m and 1m2f.

Pivotal has had a number of sons at stud over the years and six of them have themselves sired Gr.1 winners, among them Captain Rio (in Australia and New Zealand, as well as over hurdles), Falco (dual Gr.1 victrix Odeliz) and Buzzword (in Chile).

Better known in Europe is his now-retired stud companion Kyllachy, sire of the Gr.1-winning sprinters Krypton Factor, Sole Power and Twilight Son, the latter also a Cheveley Park Stud stallion. The Gr.1-winning juvenile Siyouni has sired three Classic winners in his first five crops, namely Ervedya, Laurens and Sottsass, and is one of Europe’s most sought-after sires at the sales, and dual Gr.1 winner Farhh is the sire of last autumn’s Gr.1 Queen Elizabeth II Stakes winner King Of Change and four other Pattern winners from limited crops.

Pivotal enjoyed a phenomenal year as Champion Broodmare Sire in 2019, his daughters having produced eight Gr.1 winners of 12 Gr.1 races in Europe.

Heading the list was Magical, heroine of the Tattersalls Gold Cup, Irish Champion Stakes and Champion Stakes, taking her top-flight victory total to four. A full-sister to triple Gr.1 winner Rhododendron, she is out of Pivotal’s triple Gr.1-winning daughter Halfway To Heaven. Hermosa won the Gr.1 1,000 Guineas and Gr.1 Irish 1,000 Guineas last spring to become the third top-level winner out of the Group-winning juvenile and sprinter Beauty Is Truth, also dam of Hydrangea (Matron Stakes and British Champions Fillies and Mares Stakes) and The United States (Ranvet Stakes). The fact that all five of these Gr.1 winners are by the world’s best sire, Galileo, might have aided their cause!

One Master, a daughter of the Gr.3-winning juvenile and sprinter Enticing, won the Gr.1 Prix de la Foret for the second consecutive year, while Defoe, whose dam is the 1m2f handicap winner Dulkashe, picked up his biggest victory at the age of five in the Gr.1 Coronation Cup. Four-year-old Veracious, previously placed twice in Gr.1 company, beat One Master in the Gr.1 Falmouth Stakes; her dam is the Gr.3 winner and dual Gr.1 runner-up Infallible, who has produced two other Group winners.Fairyland, a top-level winner at two in the Cheveley Park Stakes, gamely held on to win the Gr.1 Flying Five Stakes by a narrow margin. A half-sister to dual Group winner Now Or Later, she is out of the unraced Queenofthefairies.

Completing last year’s Gr.1 winners was the Moyglare Stud Stakes victrix Love. A half-sister to three previous Group winners, she is out of Pivotal’s daughter Pikaboo, who finished fourth at best from five outings at three and four.

Pivotal’s daughters have produced eight other northern hemisphere Gr.1 winners in previous seasons, including the Champion Cracksman who, like Veracious, is by Galileo’s Champion son Frankel. The remainder include the sprinters Mayson and Mabs Cross, the Classic-winning miler Olmedo, 1m2f winner Winsili, the four-time US 1m3f-1m4f Gr.1 winner Main Sequence, the Japanese 2200m Gr.1 winner Mikki Rocket and the Gr.1 St Leger hero Harbour Law. Of these eight, four were produced by Listed-winning Pivotal mares.

Even though his own stallion career is far from finished, it seems that Pivotal’s name will be in lights for some generations to come, through the achievements of both his sons and his daughters.

– Extracts from article originally published on EBN in April, 2020.